Little Emperors: Complaints Chinese parents have about their grown children. It may sound familiar. 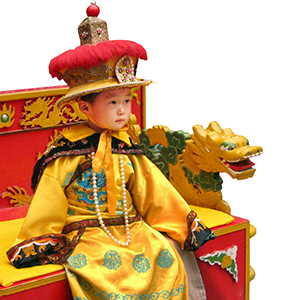 We've read a lot about our helicoptered kids. They're the one who, as young adults, have gotten used to their parents overseeing life's key decisions. Their parents have been spotted going on job interviews with them and even calling their bosses to complain when they believe their child has been treated unfairly in the work place.

We've also got our entitled young--and older--adults who think the world, to say nothing of their parents, should bend to their needs. These are the kids who expect--and are not particularly gracious about receiving--a parental allowance, even though some of them are grown up with children of their own. There are those who call this a "brat allowance."

Well, small world: Chinese parents have, according to a professor at China's Renmin University, "birthed a generation of freeloaders who feel entitled to leech off their own parents."

China's one-child policy is partly to blame, professor Zhang Ming writes. As he details his observations about these "Little Emperors,**" his commentary begins to sound familiar.

"Even after helping them find jobs and planning their whole lives out for them, a generation of so-called helicopter parents still feels compelled to help their kids buy a house. Lucky are those whose kids only ask for help with the deposit and don’t expect their parents to help them make their monthly mortgage payments, too."

In our country, recent surveys find that roughly one-third of Millennials hoping to buy a house will be relying on a loan/gift from a parent, grandparent or other relative to help with some or all of the downpayment.  There's been less follow-up on how many of us continue to help with the monthly mortgage payment.

Zhang Ming has more to report. When parents don't come up with the cash fast enough, the grumblings of Chinese adults

"are a fixture of social media feeds, where they whine about their parents having the temerity to suddenly go on a trip or moan about their in-laws playing mahjong instead of giving that money to their grandkids instead."

Evidently, it's woe unto the grandparents as well.

"Many grown children remain reliant on their parents for financial assistance even after they’ve had kids of their own, thereby perpetuating the cycle of freeloading into a third generation — except the grandkids don’t turn to their own parents for help. Instead, both generations sponge off their grandparents together."

It wasn't always so. Zhang Ming says he asked many parents of these Little Emperors whether they had turned to their parents for help and support. Just like many of us tell our children or friends, those parents tell Zhang they never asked their parents for anything, not even "for a single yuan" and then, like many of us, they reel off the the challenges they overcame to get where they are today, including supporting their parents— not the other way around.

Zhang Ming's conclusion about what he calls China's "kidult" problem:

China’s young people are paying the price of the country’s rapid urbanization drive. The high costs of migrating and living in cities have drawn multiple generations into the financial orbit of their youngest relatives, exacerbating a psychological disconnect between what is appropriate to demand from one’s elders and what is appropriate to give. The resulting emotional tug-of-war often does more harm than good.  But these reasons do not begin to explain the degree to which parents are expected to support their kids, however, or how kids came to feel so entitled to their parents’ money in the first place.

**‘Little Emperors‘ is a name that refers to only children in China after the one-child policy was implemented. Attributed most frequently to increased spending power within the family unit and the parents’ desire for their child to experience the benefits they were denied, the syndrome results from the children’s sole command of the attention of their parents and grandparents.