Grandparenting: Have we let everyone know how clever our grandchildren are? 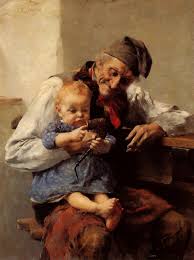 It's one of my favorite stories about my mother-in-law, who was a charming and intelligent woman, short in height but highly competitive. Even in the small things and sometimes in ways that, well, bordered on the embarrassingly exaggerated. When I told her the new height my son had reached--he graduated from high school as a six-footer and came home from his freshman year at college at 6' 3"--she denied it. "Oh no," she said. "I told Aunt Nettie he's 6' 7."

Most of us made it through the parenting years with at least some boasting--however subtle--about our wonderful children and their accomplishments. My mother-in-law was not alone in keeping those bragging rights and applying them to the next generation.

Grandparents do it, as I was reminded recently by a delightful piece in The Hindu which detailed the creative one-upsmanship of Indian grandparents or, what the author calls "the proud, and sometimes patronising, tones of the competitive grandaprent." It's worth clicking the link and reading the whole piece but here are two anecdotes that make my mother-in-law seem a master of understatement.

One discussion between friends who are both grandparents went like this: “Siddharth has already started piano lessons.” The reply: “That’s so good! So he’s seven now? My grandson started at five, and he’s such an accomplished player at 12!”

And another: “Keerti is getting quite good at her Carnatic music lessons back in the U.S. She’s found a really good teacher.” Reply: “Really? Well, we’ve arranged for a Chennai teacher to coach my granddaughter through Skype, in addition to her local classes in the U.S., of course — the teachers there are not as professional as the ones here, are they?”

The author suggests that we who live far from our grandchildren may be the worst offenders--because we don't have the day-to-day ups and downs to give us perspective. "To and fro visits are too short and ...are spent in observing and relishing accomplishments. The hours that might have earlier been put in child-minding are now spent in re-living memories of annual or bi-annual visits."

Since my grandkids arrived a year or three later than those of several of my friends, I remember all too well the fear that I would have to listen to "charming" anecdotes about the adorable offspring of their grown children. As the author in India notes, "nobody wants to hear odes to somebody else’s grandchild."

So dear reader, if you press me, I can assure you that my grown children and grandchildren are brilliant, joyful and superbly talented. (Some of them are even tall.) Anecdotal proof, however, is available only upon request. I hope I live up to that promise.

Re-framing our role in the lives of our grown children

They've graduated college, are living independently, may even have acquired a spouse--or spouse-to-be. If we are no longer the central player in their lives--and we're not or shouldn't be--then what is our role? Re-framing how we function as Mom or Dad is the ongoing challenge of parenting adult children. It's one many have tried to define. 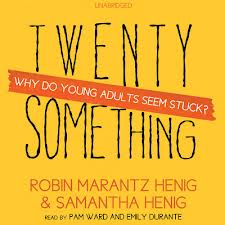 Robin Marantz Henig, a science journalist and co-author, with her daughter Samantha Henig, of Twentysomething: Why Do Young Adults Seem Stuck?, has noted that "many Baby Boomers have adopted the role of concierge, and at a luxury hotel!" For herself, Henig  tries "to think of myself as a consultant to my two daughters, but who knows—every now and then the concierge (aka Jewish mother) in me inevitably peeks out." 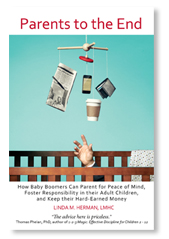 In her book, Linda Herman gives parents of grown children the "right"--or peace of mind--to let go. "Over the course of our children’s lives, we need to make the transition through the “three Cs of parenting," from choreographers to coaches on sidelines to consultants referred to for expert advice. 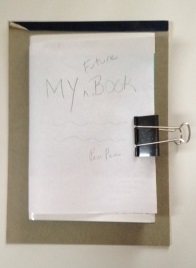 My own take is that we stumble and bumble our way from being the benign dictators that we were when we reared our young children to recognizing that, now that those kids are adults, we’ve been forced out of office. Finding a graceful way to come to grips with the coup d’etat may sound simple but is hard and harder to do as life's joys and blows come along.

It's always been my challenge: how to get a conversation going with grandchildren who live far away--some of whom are now pre-teens. Skype may make it seem like we're in the same room when we chat, but we don't have the same day-to-day sense of interchange as we would if my Grands lived next door--figuratively speaking. Or at least in the same city.

When my Grands were small, questions like, what's your favorite color? animal? sport? worked wonders in breaking the ice. But with pre-teens those questions can, well, seem childish. So far we've found it's easy with our boy Grand: sports is an ice breaker and conversation base. He's big on soccer, baseball, football--you name it. So's his dad and so is Paterfamilias [the Granddaddy]. When we're on an in-person visit, I get in on it by posing crossword questions having to do with sports (4 down: Cy Young winner, 1988), which sometimes brings him around to working the crossword puzzle with me and chatting about the various other clues, which we like to answer with the help of an iPad or laptop. Lot's of conversation starters there. 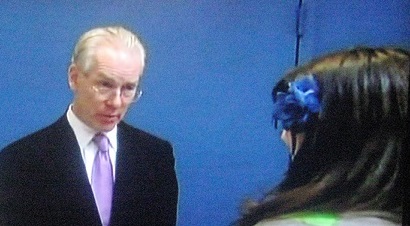 But with the girls? There isn't the same tried-and-true connector. Except that I lucked into one with my 11-year-old Grand who is living in Berlin for a year. In December, when she and her parents came to our home for the holidays we watched Runway together--hours of reruns on YouTube. It's become our "ice-breaker"--that is, my way of getting a conversation started. And it's been working. It isn't the fashion stuff that' we talk about--neither of us is into high style or brand labels. Rather it's the personalities on the show. We are both fans of Heidi Klum (and the way she says "Auf weidersehn" when she gives the week's losing designer the bad news) and Tim Gunn, the mentor and co-host.

When we Skype we talk about the new show (Under the Gunn), what it's like. And then came what I call My Big Breakthrough. I mentioned on one of our chit chats how I heard Tim Gunn interviewed on Terry Gross's Fresh Air show on NPR. My Grand wanted details. Among the points Gunn made--and among those I chose to repeat to my Grand (I did not tell her about his suicide attempt when he was 17)--was how difficult a childhood he had as a schoolboy, how he was shipped him from one boarding school to another and teased for being different: he had a stutter.

Tim Gunn's story was the opening. She sat on her sofa at her end of the SKype call and we talked about the fear of being teased or bullied at school and that morphed into her talking about her social standing in school--a school she was attending for one year while she is in Berlin. I told her what mine had been [neither popular nor bullied--just a shy person with friends who, like me, weren't part of the popular crowd] and she detailed her's. It was a wonderful conversation. I got a sense of the struggles she was having and concerns she had at the school in Berlin, her hopes for what it would be like when she was back in her home school in September with her friends--with whom she keeps in touch by email and Skype. (Let's hear it for technology!) I feel I know her better and--this is all hope on my part--I feel she feels closer to me, that there's an enhanced element of trust.

What I tell myself now is this: You never know where the opening is going to come from. (Thank you Tim Gunn for being so open and honest--and so likeable--that an 11-year-old takes seriously what you have to say.)  When that opening for an intimate conversation does come along, I plan to hold on and make the most of it. It's the jackpot. And say my Hosannas that it was there.  It may not come again.

Money Matters: That feel-good feeling when we help out our grown kids

We were well into our pear-tini's (a delightful pear flavored cocktail) when my friend C said she didn't mean to gossip but....her husband's father still pays his daughter's credit card bills even though the daughter (the dad's youngest child and only daughter) is about to turn 40. The daughter, C says, has a good job and so does her husband. "He [the dad] just spoils her rotten," says C, whose Midwestern father wouldn't have dreamed of running up a credit card bill, no less paying his daughter's debts or minor indulgences.

I cringe. I don't pay my children's credit card bills but I do help out my kids occasionally--and I enjoy doing it. Am I spoiling them? They give no indication that they expect any assistance. The few times they have asked for money to help them ride out a cash flow problem, they have paid it back quickly and in full. It was hard to express to C how much pleasure I get from giving--from knowing I'm there as a helping hand, to take the edge off any financial worries or make some small indulgence possible.

Now I feel vindicated--and pretty upbeat about myself. A new study finds that while we parents of adult children want our kids to be independent and self sufficient, some of us still get a thrill from helping out--though some decidedly do not.

The study looked at 337 older parents of middle-aged children and found that parents are giving help to their children, well into their children's middle age. "This support is often associated with lower rates of depression among the older adults," reports Lauren Bangerter, one of the researchers from Penn State. Those who felt rewarded by providing financial support had fewer depressive symptoms when they were helping generously compared with when they weren't. Meanwhile, those who did not feel rewarded by helping financially had more depressive symptoms when they helped financially.

The results also suggest, according to Steven Zarit, a Penn State professor also involved in the study. "that depressive symptoms are more frequent when the level of reward a parent feels regarding giving is inconsistent with the amount of tangible support that he or she actually gives."

To those of us who have the wherewithal and share it with our grown kids no matter their age: Let's have another pear-tini and give ourselves a pat on the back. We make ourselves feel good about being indulgent--even if others see it as spoiling our kids rotten.